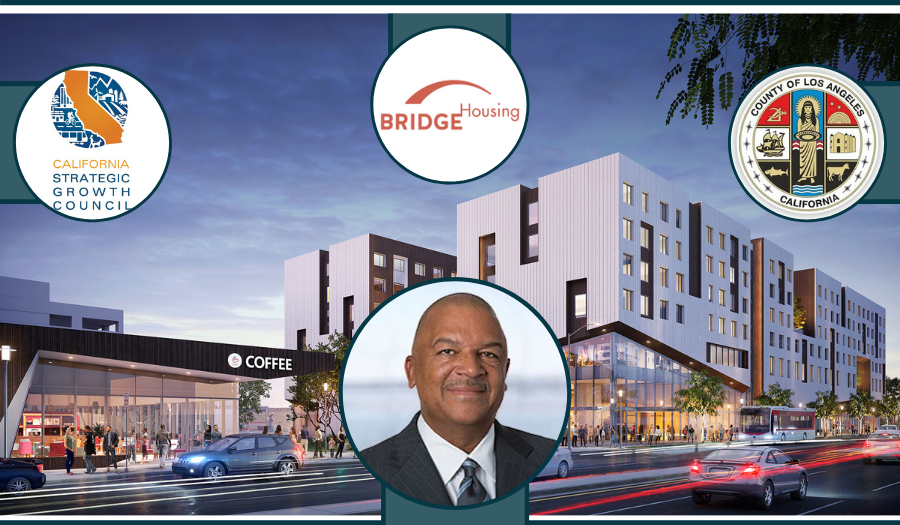 Non-profit developer BRIDGE Housing has received guarantees for $167 million in public financing to support affordable housing construction across the state, including more than half dedicated to the two most transformative developments in the Greater South Los Angeles Market – Evermont and the Jordan Downs redevelopment.

On February 8th, the LA County Board of Supervisors approved the issuance and sale of $72.4 million in bonds to finance affordable housing construction at the revolutionary, mixed-use development branded as Evermont.

With the SEED school already under construction, the development team for Evermont’s second phase – BRIDGE, Coalition for Responsible Community Development (CRCD) and Primestor Development – bring a combined 85 years in local, community-centered development expertise to the project.

Selected to develop the multifamily component, BRIDGE will use the new funding to build 180 affordable and permanent supportive housing units within the larger 4.2-acre County-owned site. The family component will feature 118 one-, two-, and three-bedroom apartments reserved for households earning between 30 and 80 percent of the area median income. The second component , which will serve seniors at risk of homelessness, will consist of 62 one-bedroom units designed for older adults earning up to 30 percent of the area median income.

According to the resolution adopted by the Supervisors, BRIDGE will receive $46.3 million in bond financing for the family development and an additional $26.9 million in bonds dedicated to the senior project.

The announcement comes shortly after BRIDGE was awarded $95M by the California Strategic Growth Council to fund four projects across the state, including $13.9M dedicated to the $1B Jordan Downs redevelopment

“The AHSC Program fosters healthier, sustainable communities through the combination of affordable homes and transportation innovation,” said Ken Lombard, BRIDGE President & CEO. “We and our partners are grateful for these important investments that will be a win-win for communities across California.”

BRIDGE has completed  its second development at Jordan Downs, Park Place, a $46M property with 80 one- to four-bedroom units on E. 99th Place, and expects to break ground  on a  third phase with 76 affordable homes in April 2022. In 2020, BRIDGE celebrated the opening of Cedar Grove, a LEED-Gold certified, 115-unit building at Century Boulevard and Grape Street.

About BRIDGE Housing Corporation
With more than 12,500 apartments under management and $3.8B in the construction pipeline, BRIDGE Housing is one of the largest nonprofit developer, owner and manager of affordable housing throughout California, Oregon and Washington.

The company operates under the leadership of President and CEO Ken Lombard – a long-time real estate executive who emerged as an influential player in the economic development landscape as co-founder of  Johnson Development Corporation in 1992.