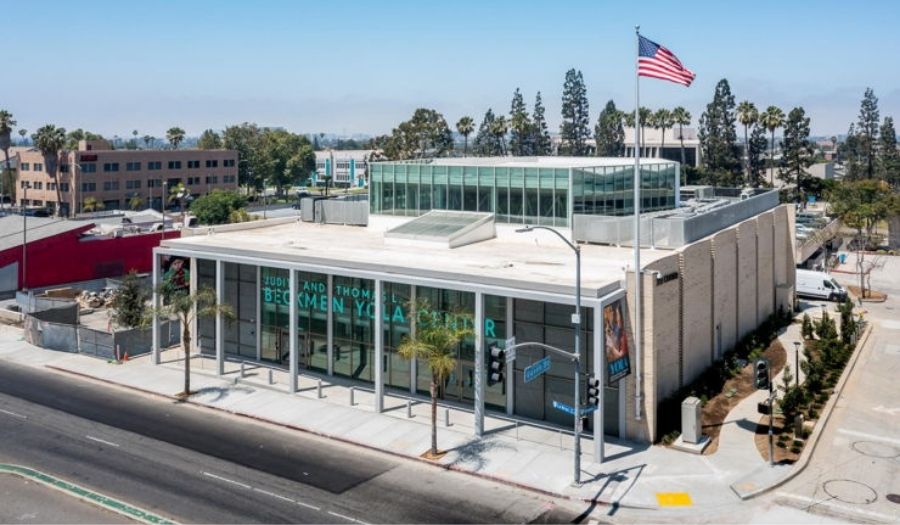 The Youth Orchestra of Los Angeles (YOLA) held a ribbon cutting ceremony over the weekend to officially open the $14.5M performing arts center in Inglewood.

Thanks to the leadership gift from Judith and Thomas I. Beckmen, acclaimed architect Frank Gehry transformed a former bank near into a 25,000-square-foot, state-of-the-art performance venue and international teaching facility.

The project emerged out of a close collaboration between the City of Inglewood, LA Philharmonic, artistic director Gustavo Dudamel, and Gehry – who also designed the Walt Disney Concert Hall which houses the Philharmonic.

According to LA Phil’s Music and Artistic Director Gustavo Dudamel, the YOLA Center “is the realization of a beautiful dream: to create a space where young people can have access to beauty. It is a place of inspiration, transformation and a physical manifestation of our mission to change peoples’ lives through music.”

Architectural flourishes include retractable bleachers, a movable acoustic wall with the ability to convert the performance hall into two spaces, a 45-foot ceiling, and the “lighthouse,” a glass-walled roof pop-up. It provides natural lighting for the Edgerton Foundation Performance Hall.

Founded in 2007 as an initiative by the LA Phil, YOLA currently serves more than 1,300 students across four sites in Los Angeles. The after-school program provides students with instruments, up to 18 hours of intensive music instruction, and leadership training at no cost.

Of the initial 126 students participating in the center’s first classes, nearly 81% were residents of Inglewood, according to LA Phil CEO Chad Smith.

With a goal to eventually host 500 students, YOLA’s plan is to continue engaging with the Inglewood community on a long-term vision for the Center as a performance venue, creative laboratory, learning hub, and community center.