The Devaluation of Assets in Black Neighborhoods: The case of commercial property 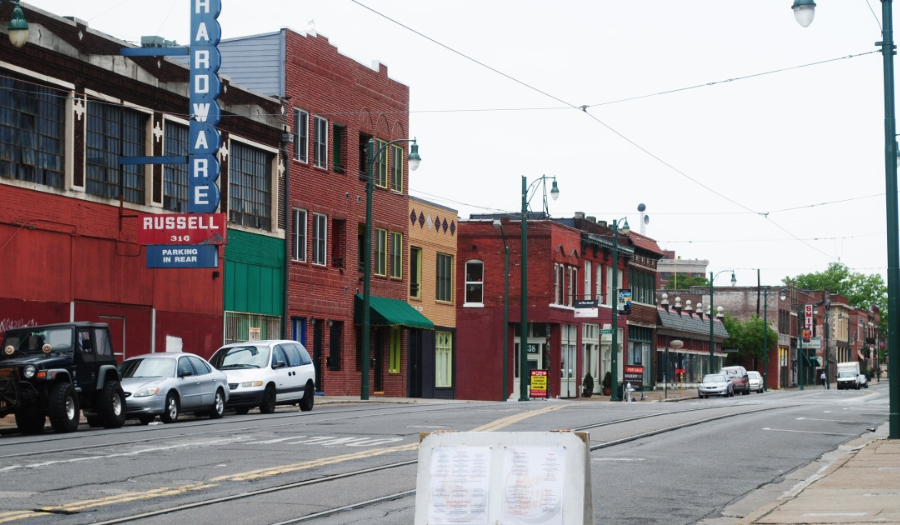 In 2019, a Black real estate developer named Brian Rice tried to get a loan to renovate some buildings he purchased on a neighborhood commercial corridor in the majority-Black Ensley neighborhood of Birmingham, Ala. His vision was to turn these vacant buildings into small businesses, offices for nonprofits, and a conference center. But the bank’s appraisers said that his properties were basically worthless, leaving Rice with a large gap between the value he believed could be realized with investment and the value given to him.

What explains this gap? It’s possible that Rice was overly confident in the prospects of earning revenue from these developments. But it’s also possible that the properties were devalued because of who was living near them.

Either way, the fiscal consequences for Black neighborhoods are severe. The commercial real estate (CRE) market is relatively small compared to housing. However, because individual CRE assets are large and more valuable per square foot, their health can have an outsized influence on the well-being of a community.

IN REAL ESTATE, BOTH LOCATION AND RACE MATTER

In order to isolate the impact of race, we built a national dataset of predictors of commercial real estate value to investigate how local characteristics (measured at the ZIP code level) predict CRE asking rents, with a focus on the racial composition of neighborhoods as a potential source of market inefficiency, which has not previously been studied.

We found that location characteristics play a huge role in determining CRE value. If one ranks ZIP codes by the aggregate value of each real estate product type, the top 1% are home to 36% of office value, 11% of retail value, but only 9% of the value of owner-occupied homes.

However, we also find that race matters. After accounting for other predictors of CRE value, we estimate that retail space is undervalued by 7% in majority-Black ZIP codes. Yet, office space is only devalued by 1%, and the estimates are not statistically significant. Given the importance of tenant revenue in setting commercial rents, the difference between retail space and office space suggests that consumer behavior—which is less important for office than retail space—is playing a large role in limiting the value of real estate in Black neighborhoods.

CONSEQUENCES FOR BLACK PEOPLE AND COMMUNITIES

The work of the Urban Markets Initiative at Brookings has articulated sources of market information gaps and mechanisms linking these gaps to barriers to and distortions of market activity, such as consumption, site location decisions, and lending. For example, retail stores will see depressed revenue if non-Black people are discouraged from going there because of its location in a Black neighborhood, and owners of professional businesses may prefer to locate their office in non-Black neighborhoods as a signal to potential employees, who suffer from the same ignorance and bias as retail consumers. These information gaps—and the subsequent huge distortions in the size of the markets that home sellers and retailers in Black neighborhoods have access to—are a primary cause of devaluation.

We believe the devaluation of commercial real estate in Black neighborhoods is consistent with a general pattern of devaluation of Black people living in these neighborhoods, which has deep roots in U.S. history. In a series of papers, we have documented that residential housing, small businesses, and now commercial properties in Black-majority areas realize lower market potential than similar properties or businesses located in non-Black areas. Devaluation may operate through private decisions, such as discrimination against individual Black owners, but it may also operate at the neighborhood level, which is not relevant to traditional civil rights legislation. Since most commercial real estate is not owned by Black people, discrimination at the individual level is an unlikely explanation for the disparities we observe.

Neighborhood-level devaluation hurts consumers of all races, even when it occurs through race-neutral channels. For example, at least some part of the observed devaluation may be due to asymmetries in information, leading to market inefficiency. In other words, many potential buyers may be unaware that a home or commercial property in a Black neighborhood offers the space they need at a competitive price because they do not live in majority-Black neighborhoods, rarely visit such neighborhoods, and are not socially connected to residents or visitors there. For similar reasons, they may be unaware that a valuable meal could be had at a Black-owned restaurant in a Black neighborhood. As a result, these potential buyers may pay an artificial premium in a majority-white neighborhood. As Sheryll Cashin has argued, “Separation is pricey.”

Another theory is that devaluation could operate through anti-Black stereotypes or other psychological mechanisms consistent with racial discrimination but not necessarily identical to discrimination directed against individuals. Potential buyers of any race may hold exaggerated fears or anxiety associated with Black neighborhoods or regard those spaces as culturally distant. We aim to clarify which of these channels matters most in future research.

Any amount of devaluation has real consequences for Black neighborhoods. In addition to the direct loss of access to the billions of dollars in residential capital estimated in this analysis, a systematic negative differential in valuation of Black neighborhood real estate deflates the size of the tax base the community has to support infrastructure and services and renders these communities vulnerable to speculation. Since devaluation reduces the carrying costs of real estate, it can be exploited by investors with greater access to capital who can buy low and sell high, perhaps anticipating future racial demographic change in the area.

There is a connecting thread between the racial inequity created by the wealth extraction from African Americans during slavery and the findings in this report. The connection goes beyond the mere existence of racial bias—it is a legal, economic, and moral framework that undermines Black people through the real property system. A system that enabled liberty would function differently. What comes next must be to imagine that system.

The article was originally written by Jonathan Rothwell, Tracy Hadden Loh, and Andre M. Perry for The Brookings Institute