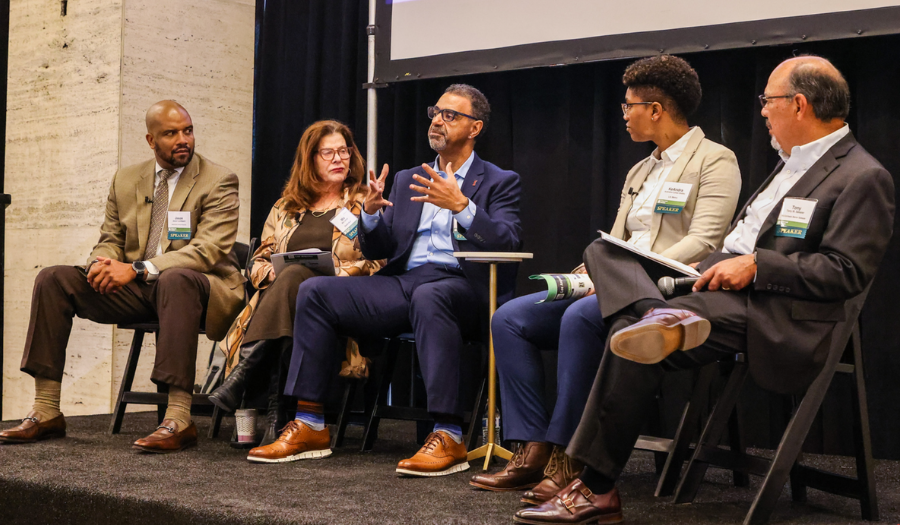 ULI Los Angeles recently hosted its signature event, the Urban Marketplace, an annual real estate expo created to bring attention to the economic opportunities that exist in the city’s most underinvested communities.

For more than twenty years, the conference has successfully pushed back against old narratives about which communities deserved investment. In the process, the Urban Marketplace became a signature event for the organization and a spark for development activity from Downtown LA to Inglewood.

When the conference first launched in 2000, simply getting the industry to pay attention to communities like South Los Angeles, and the Black and Brown professionals from the community was a significant challenge.

According to event co-founder Michael Banner, the President and CEO of Los Angeles LDC, a lot has changed since then. “Twenty years ago, the panel did not look like this”, said Banner.

However, with capital now pouring into South Los Angeles by the billions, event organizers have shifted the focus in recent years towards making sure that new development adds value to existing residents rather than displacing them.

As Banner pointed out prior to this year’s event, “Yes, in the past 10 years, the West Adams community south of the freeway has seen a revival, but it’s not the people who had lived there for generations. As with so many others, those people were displaced.”

Hosted at the historic Trust Building in Downtown LA, the 2022 Urban Marketplace was all about South Los Angeles.

A showcase for some of the most innovative ideas, projects, and thought leaders from across the South LA development community, the event focused on the intentional and strategic work necessary to create greater equity around new infrastructure investments.

“Infrastructure is one of the most powerful and necessary tools for revitalizing struggling neighborhoods. And yet, past projects have caused harm to communities,” says Urban Marketplace Chair and Ashurst counsel Shmel C. Graham.

For event organizers like Shmel, the program’s real focus is to “encourage development that is thoughtful and meaningful to those communities”.

Which is why, according to Graham, the program was intentionally structured to increase an exchange of ideas.

“Learning is two-ways. The developers and the industry professionals along with the community. If we realize how we all work together to create the built environment, we’ll have better projects that we all can be proud of.”

From a fireside conversation with Metro CEO Stephanie Wiggins to the nearly twenty roundtable discussions led by some of the most influential development figures working in the community, everything about the event was designed to create an incredibly interactive environment.

According to Banner, who was honored during the event for a career dedicated to raising awareness about the opportunities in undercapitalized communities throughout the city, “It was a breath of fresh air coming out of the pandemic to be a room with diverse professionals trying to solve problems.”

For community advocate, entrepreneur, and long-time real estate developer Danny Bakewell Jr., the conversation is an important first step. “I think any time we can find ourselves in a space that can be beneficial to our community, we have an obligation to be there” Bakewell said.

But he also challenged the finance and development industry to move far beyond simple words and the countless corporate commitments to increase equity in the aftermath of the George Floyd murder.

According to him, that commitment needs to extend to things that legitimately impact community empowerment: Housing, Jobs, Contracts, and Opportunities.

Using the $2.1B Crenshaw-LAX Transit Project as an example of a public agency’s genuine efforts to partner with community, Bakewell noted that Metro’s construction mitigation programs were created to address legitimate community concerns.

For Banner and others, elevating awareness about a different way of approaching community development has been the Urban Marketplace’s purpose all along.

Now thanks to his vision and ULI’s sustained commitment, the conference provides the space for solutions to be presented from people with the best experiences and perspectives to provide them.