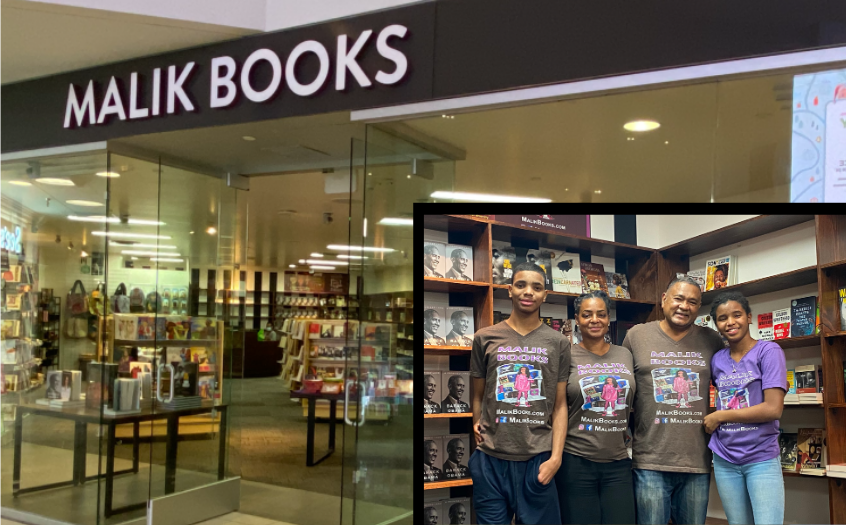 When mandatory stay-at-home orders were issued last March, thousands of local businesses were left scrambling. For most ‘brick and mortar’ retailers, the ability to adapt meant the difference between business survival and permanent closure. For Malik Books, the pandemic not only cut short what had been a triumphant homecoming but threatened to close one of the few remaining black-owned bookstores in the city.

After a nine-year hiatus, Malik Books reopened at the Baldwin Hills Crenshaw Plaza in 2018. A book seller for more than 20 years, owner Malik Muhammad describes his store as the “total African-American experience in pride, culture, and self-esteem where we give voice to the voiceless.”

Unfortunately, even as the restrictions on many local businesses eased over the summer, retailers like Malik continued to struggle as malls across LA County remained closed. Without the usual walk-in business, Malik credits an increased online presence as a major reason the business has survived.

“It was a blessing that we had a website in place during the pandemic, to be in a position to take advantage of online business” says Malik who runs the store with his wife, Aprilia.

In addition to the website, some well timed news features and a pro bono commercial shot by Leo Enterprises helped to raise the store’s profile. The couple estimates they delivered more than 100 contactless orders in and around the LA area at the height of the pandemic.

As protest spread across the country in the wake of George Floyd’s murder, many independent black-owned bookstores saw a significant increase in sales. With anti-racist books flying off of the shelf, Malik suddenly found himself filling orders across the nation. Grateful for the new business, Malik recognizes that ultimately the store’s long-term success remains tied to the community it serves and his family’s ability to continue “giving voice to the voiceless”.

“People come to the shop, and they are so thankful that we are open…they realized the importance of having a local community bookstore and having these kinds of books available,” says Malik.

While business is certainly better today, overall foot traffic has been noticeably down since the historic South Los Angeles mall officially reopened in mid-October. Adding another layer of uncertainty, a bitter struggle over the ownership and redevelopment plans for the Baldwin Hills mall has made planning for the future difficult. “We have to be ready when changes like this happen,” laments Malik, who has not heard from management about the status of the sale.

In an attempt to safeguard against potential disruptions brought on by a potential sale, Malik Books opened a second location in the Westfield-Culver City Mall (aka the Fox Hills Mall). Opening on Black Friday, the new store is located on the second floor next to See’s Candy.

When asked about the decision to add the second location, Malik acknowledged the risk but said that the family took “a leap of faith”. Ultimately, his belief is that the new store, coupled with increased online spending and continued support from the community gives Malik Books the best chance to survive whatever comes next.Throughout the holiday season, Malik Books will be open daily at the Baldwin Hills Mall from 11am-7pm and at the Westfield-Culver City Mall from 10am-8pm. For those unable to stop by the stores in person, customers are encouraged to shop online by going on the website or by making a donation to their GoFundMe campaign.