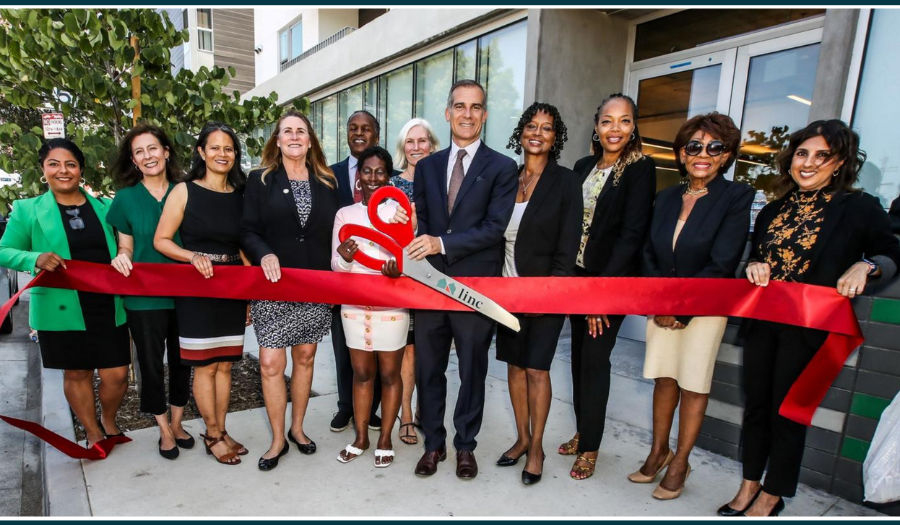 Tammy, one those new residents, hasn’t had a stable home since she was 16 years old, when her family turned her out because she was pregnant. At 42, she’d almost given up.

While living on the street for decades, Tammy was abused, forced into prostitution, became addicted to drugs and struggled with severe depression. Without a place to call home, she slept under bridges, in a tent and in her car.

“The day I moved into Cadence, I was amazed,” she said. “Not only did I have a home, but it was filled with furniture, towels, sheets, dishes – everything I needed. It was warm and welcoming. I didn’t have to worry about where I was going to sleep. I could relax. I could breathe.”

With a name inspired by Central Avenue’s rich history as the heart of West Coast jazz scene, Cadence features 63 one-bedroom apartments with one bedroom and a manager’s unit set across two connected four-story buildings located at 11408 S. Central Avenue.

“I have witnessed the great work Linc Housing has done in other areas of my district, including the opening of Fairview Heights Apartments in Inglewood,” said Chairwoman Waters.

“The opening of Cadence represents a necessary step toward our goal of ending homelessness and increasing the share of accessible housing in Los Angeles. I can’t applaud Linc Housing enough on this huge accomplishment.”

In the last five years, Los Angeles has approved more affordable and supportive housing than in the previous 30 years combined. The accelerated pace is largely due to a pair of ballot initiatives approved by local voters.

Funding for the development, including $10.1 million in HHH Funds managed by the Los Angeles Housing Department (LAHD). Approved by voters in 2016, Measure HHH is a $1.2 billion bond to build up to 10,000 units of safe, clean affordable housing for the homeless.

“Our city is made up of the best people in the country, people willing to spend their tax dollars to help their neighbors get back on their feet. Proposition HHH has done more than bring unsheltered Angelenos indoors, it’s provided them with hope and security,” said Mayor Eric Garcetti.

At Cadence, ‘wrap around’ services include counseling for mental and physical health, job placement and education, as well as counseling on substance abuse and money management. Linc Housing staff will also assist with obtaining and maintaining benefits and referrals to other community-based resources and services.

Those services have already helped Tammy to make significant progress. Since being approved for the program, Tammy has graduated from a medical assistant program. Since moving into Cadence, she has found a job, and reunited with her mother and her grown children. While she still has a long way to go, Tammy knows that she has a stable home and a foundation to build her life.

Design for the development was done by Lahmon Architects, while Walton Construction Inc was in charge of the build.

About Linc Housing Corporation
Linc Housing is one of California’s most productive nonprofit developers of affordable housing with a commitment to building communities and strengthening neighborhoods for people underserved by the marketplace.

Linc has helped create nearly 9,000 homes in 90 communities throughout the state. The organization’s properties are known for excellent design, outstanding management and life-enhancing services for its residents. For more information, visit www.Linchousing.org.