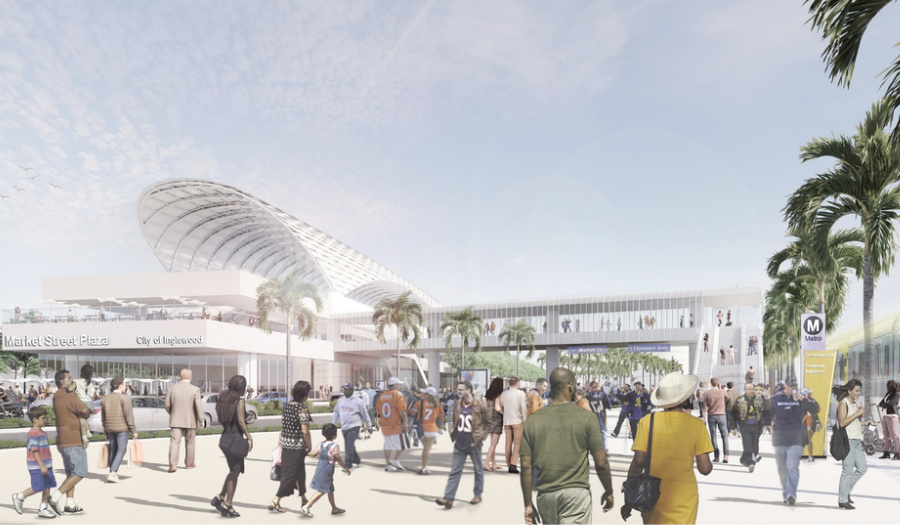 Looking to build the infrastructure required to transform the city around the Sports and Entertainment district, Inglewood officials recently presented updated plans for an automated people mover. First announced in 2018, the proposed monorail-like system would connect the Crenshaw/LAX Line with the Forum, Sofi stadium complex, and the recently approved Clippers arena.

According to a recent article by Steven Sharp for Urbanize LA, the current plans call for approximately 1.6 miles of elevated guideway – running along Market Street, Manchester Boulevard, and Prairie Avenue.

As first reported by Unstatable, officials intend to finance the $1 Billion project through a mix of local tax revenue, corporate sponsorships, and passenger fares. It should be noted that at least two of the proposed funding streams – an increased real estate transfer tax and a tourism impact fee – would require 2/3 approval through a citywide vote.

Environmental review for the project is expected to be completed in March 2021, with construction slated to begin in December 2021.

Officially called the Inglewood Transit Connector Project, the new people mover would be the second such transportation project in the area – with another elevated tram connecting LAX terminals to the Crenshaw light-rail system’s 96th street station already under construction.