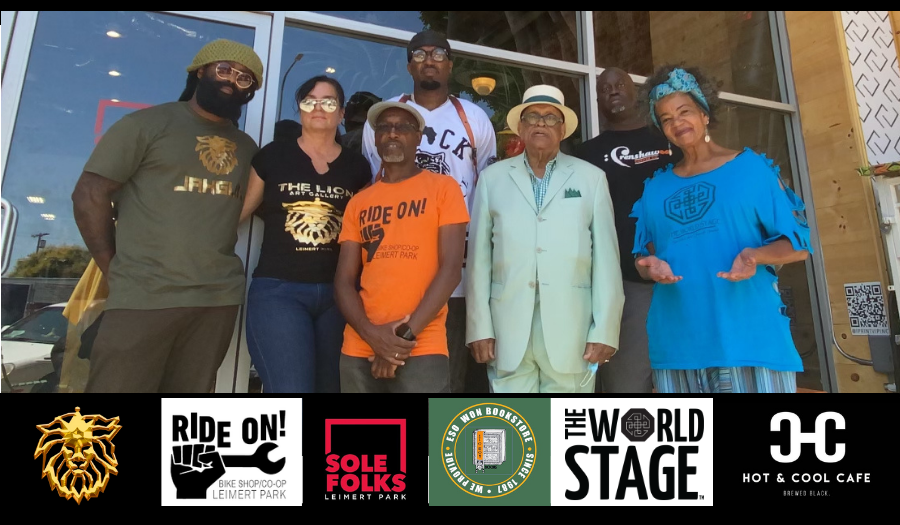 Over the last year, Sole Folks has transformed dormant retail space in Leimert Park into a vibrant hub for creatives and commerce. In the process, the retail co-op has also become a vital link to the future of a reimagined Black Arts District along the Crenshaw corridor.

Home to more than 40 unique brands, Sole Folks combines a store front with a business incubator to provide Black fashion designers, artists and creatives the tools and resources to turn concepts into cash.

West, who is the visionary behind Sole Folks, says he would best describe himself as an innovator and someone who dreams big. Traits, West says he developed from his mother.

“My mom is self-taught, she’s motivated, an entrepreneur in her own right.  She is very creative. She did well with what she had” West said.

Connected to the Los Angeles streetwear scene for more than twenty years, Akil first tapped into that entrepreneurial spirit during the late 1990s. A former model, West invested his money and opened his first clothing store in the Miracle Mile district.

“Then I went to prison” West shared, “I was successful in certain areas then I ended up trying to take short cuts.”

While serving his 15-year prison sentence, Akil decided to focus his energy on philanthropy and showing young people how to make successful business moves.

Once he returned home, West and business partners Nika King and Taz Arnold began to put actions to ideas, eventually transforming his vision into a resource by “meeting young people where they are at” – through sneakers, fashion and our culture.

Now Akil, along with a group of other Leimert Park business owners, hope that a bold move into commercial real estate will help secure the future of the historic community.

For nearly 100 years, Leimert Park has been at the center of conversations involving race and landownership in Los Angeles. One of the city’s first master planned communities, ‘excellent’ housing restrictions barred black ownership in Leimert until the Supreme Court ruled those covenants illegal in 1947.

As Black families began to migrate west from Central Avenue during the 1950s and 1960s, Leimert’s business district evolved to become the epicenter for Black L.A.’s arts and jazz culture.

Unfortunately, following the 1992 Los Angeles Uprising, the once thriving district became increasingly blighted – struggling to attract the investment necessary to spark a rebirth.

In recent years, a new generation of community conscious entrepreneurs have stepped in to carry the torch.

It Takes A Village

West shares there has been tremendous support for Sole Folks and he appreciates everyone’s contributions to making the store what it is today.

In addition to his partners, who he credits for taking Sole Folks to an entirely different level, there is also Ferris Maison, who West calls the “engine” behind Sole Folks.

“She is a constant professional who always stays levelheaded. Business runs smoothly and people are always going to receive consistency with her,” West detailed.

A Carson native, Walker is the co-founder and chief executive of Treehouse – a real estate development company that focuses on co-living apartment buildings.

Planning to bring his concept to the Crenshaw District soon, Walker has already promised to carve out space for the art lab when the building is redeveloped.

Buying Back The Block?

Although West has much to celebrate, the building that houses Sole Folks, along with several other Black-owned businesses including Hot and Cool Cafe, the World Stage and Esowon Books was recently listed for sale.

As word of the pending sale began to spread, many locals became justifiably concerned that the popular businesses could soon be pushed out through rental increases or redevelopment.

However, the listing has also presented an opportunity for real community ownership.

“During Juneteenth this year, I was speaking with Tony at Hot and Cool Cafe and I asked him what was next? I told him I feel like we should own this building.”

When the property was put on the market a few weeks later, West viewed the sale as the perfect opportunity to execute on the vision he had during that Juneteenth conversation.

“The asking amount seems like a huge figure, but I also understand the value of this property. I understand what’s happening in the community. Those who understand commercial real estate, also know the value in a place like Leimert Park” says West.

The goal is for all the Black businesses currently operating in the building, to purchase and hold equal ownership in the property. While some details are still being developed, West believes that the group would be great stewards of the property.

“We are actively, every day, having conversations with institutions, organizations, and philanthropic brothers and sisters who want to see this property in the hands of the people,” West said.