This Young Black Design-Builder Is Remaking His Corner Of Crenshaw  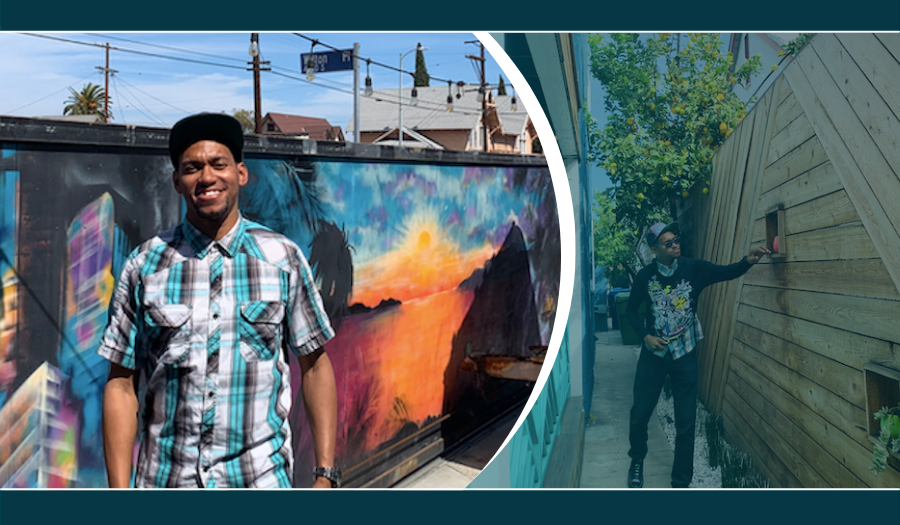 For Zerik Scales, being a young, Black design-minded developer with a hyper-local vision to revitalize South Los Angeles – for the residents of the historically Black area – presented unique challenges.

For starters, nobody wanted to lend him money in 2016, when he set out to buy the four-unit property he now rents as a long-term Airbnb.

“They laughed at me and said, ‘Are you crazy?’” says Scales, who looks younger than his 39 years with a jaunty upturned baseball cap bill and pastel graphic art on his pullover. “I couldn’t convince anybody to put money here. They can’t believe this could work – to this day!”

But he was right, and they were wrong.

After overcoming years of local legislative and pandemic-driven hurdles, Scales’ vision is working.

Neighbors, as well as people from all over the world, come to his striking Eames blue property with high-pitched rooflines. Almost weekly, locals rent out the backyard for birthdays and other celebrations under festive stringed lights. Renters come for the weather and Scales’ design aesthetic summed up by his company’s motto: “Soul your home.” Yes, it is not far from homeless tents and empty storefronts, but it’s also near Southern California beaches, museums and great restaurants. Another quote from his website: “Making the hood pencil.”

“I love it,” says Nino Jeudy, a 23-year-old civil engineering student from France who was spending a month in Los Angeles studying in a program run by Cal Poly Pomona.

“People are so nice here,” he said on a recent afternoon before heading out for a run past historic homes, many of which are more than 100 years old. “They say hello. Not like in Paris.”

Scales calls his retreat The Homestead because, once behind its tall fences, with spring breezes wafting over the modern landscaping, “You just don’t want to leave,” he says. Residents relax on balconies, some overlooking a lemon tree bursting with yellow fruit.

Now, he wants to spread the good energy to revitalize his entire block and beyond.

Destination Crenshaw’s DC Thrive program, which supports local Black businesses, always believed in Scales’ vision. Through DC Thrive, he accessed an initiative for local entrepreneurs through LISC LA, called Ascend LA, which helped him with the side of the business entrepreneurs often find cumbersome — administration. Through the program, Scales was provided with advice on tax planning, book-keeping and other support, including strategies for establishing business credit.

“Something that simple was kind of revolutionary,” Scales says. “They get you connected with city loans and help you bid on city projects.”

April 4 is the next deadline for applications to the upcoming LISC Ascend cohort. A March 31 informational session about the program is free and open to the public.

Scales completed a five-year accredited bachelor’s degree in architecture from the HBCU, Hampton University, and holds a master’s degree in urban planning from USC. His company, Habitable Art, has renovated more than 60 properties since he founded it a decade ago. He lives in View Park in his mother’s childhood home, five minutes from the Airbnb.

This is his vision for his community: the next generation of Black people hang onto their parents’ and grandparents’ properties; seedy motels are converted into stylish boutique hotels; long-time bars and restaurants stay Black-owned, becoming funky food oases and updated beer and wine parlors.

“Zerik has demonstrated proof of concept. He’s exploded generations of myths about what can and can’t be done economically in South Los Angeles,” says Jason Foster, president and COO of Destination Crenshaw. “His success illustrates how top-quality commercial residential development can be done by and for Black people who live here.”

“Zerik’s project creates that vibrancy,” says Anderson, author of the 2021 book “Urban Magic; Vibrant Black and Brown Communities are Possible.” “If you look at L.A. County as a garden, we need to be filling up all the garden, not just parts of it. Then this homeless thing won’t be an issue.”

Until that happens, Scales regularly connects with people who lack housing. When they pitch tents out front of his rental, he politely asks them to move and offers to pay them to clean up trash. Usually, they do.

Getting to where he is today hasn’t been easy.

A change in local laws governing Airbnb rentals forced him to abandon his original short-term rental model and, after the pandemic wiped out eight months of bookings overnight, he considered selling. Fortunately people working from home began booking rentals of 30 days or more.

And he spreads economic opportunity to others. Housekeeping for his Airbnb generates about $4,000 a month for a local Black-owned company.

Lastly, the neighbors who originally “thought I was some white guy, gentrifying” have had a change of heart. After somebody tagged his fence years ago, they put out the word that the owner was local.

Since then The Homestead has remained pristine.